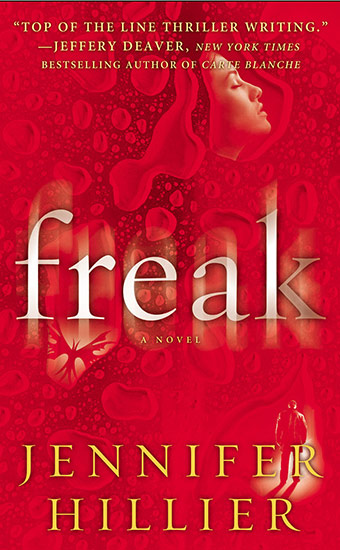 Jennifer Hillier amps up the terror of her “truly frightening” (Suspense Magazine) debut thriller, Creep, returning to the Pacific Northwest college town where one killer’s stranglehold has ebbed . . . but another sick mind emerges from the shadows.

Sitting alone in a maximum-security prison cell, Abby Maddox is a celebrity. Her claim to fame is the envy of every freak on the outside: she’s the former lover of Ethan Wolfe, the killer who left more than a dozen dead women in his wake and nearly added Puget Sound State professor Sheila Tao to the tally. Now Abby, serving a nine-year sentence for slashing a police officer’s throat in a moment of rage, has little human contact—save for the letters that pour in from demented fans, lunatics, and creeps. But a new wave of murders has given Abby a possible chance for a plea bargain—because this killer has been sending her love letters, and carving a message on the bodies of the victims: Free Abby Maddox.

Jerry Isaac will never forget the attack—or his attacker. The hideous scarring and tortured speech are daily reminders that the one-time Seattle PD officer, now a private investigator, is just lucky to be alive. Abby Maddox deserves to rot in jail—forever, as far as Jerry’s concerned. But she alone may possess crucial evidence—letters from this newest killer—that could crack open the disturbing case. With the help of Professor Sheila Tao, seasoned police detective Mike Torrance, and intuitive criminology student Danny Mercy, Jerry must coax the shattering truth from isolated, dangerous Abby Maddox. Can he put the pieces together before Abby’s number one fan takes another life in the name of a killer’s perverted idea of justice?

“This book freaked me out—in a good way. In a word, ‘frightening.’ This one blew me away.”
—Robert Dugoni, New York Times Bestselling Author
“Taut and fraught with surprise twists, Hillier’s thriller is addictive.”
—Kirkus
“Hillier adopts the style of the great fifties noir authors . . . if your tastes run to Cornell Woolrich or Jim Thompson, Hillier is what you’ve been waiting for.”
—The Globe and Mail
“Toronto’s Hillier [is] an author in the [Chelsea] Cain mould, matching a nasty imagination with a clean and flowing prose style.”
—Toronto Star