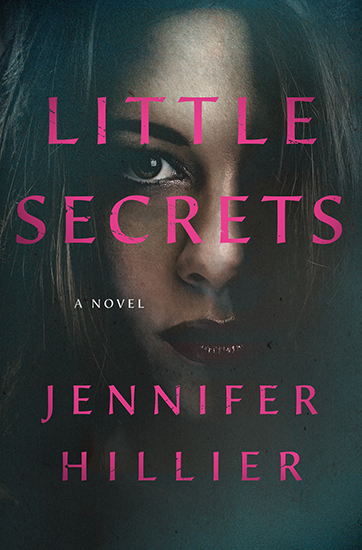 From the author of Jar of Hearts, a mother driven to the edge by the disappearance of her son learns her husband is having an affair with the woman who might have kidnapped him.

Two hundred and forty seconds. That’s how long it took for someone to steal Marin Machado’s four-year-old son.

Marin had the perfect life. Married to her college sweetheart, she owns a chain of upscale hair salons, and Derek runs his own company. They’re admired in their community and are a loving family. Up until the day Sebastian is taken.

A year later, Marin is a shadow of herself. The FBI search has gone cold. The publicity has faded. She and her husband rarely speak. The only thing keeping her going is the unlikely chance that one day Sebastian reappears. She hires a P.I. to pick up where the police left off, but instead of finding him, she discovers that Derek is having an affair with a younger woman.

Kenzie Li is an artist and grad student—Instagram famous—and up to her eyeballs in debt. She knows Derek is married. She also knows he’s rich, and dating him comes with perks: help with bills, trips away, expensive gifts. He isn’t her first rich boyfriend, but she finds herself hoping he’ll be the last. She’s falling for him—and that was never part of the plan.

Discovery of the affair sparks Marin back to life. She’s lost her son; she’s not about to lose her husband, too. Kenzie is an enemy with a face, which means this is a problem Marin can fix. But as she sets a plan in motion, another revelation surfaces. Derek’s lover might know what happened to their son.

Jennifer Hillier’s novel Little Secrets is being adapted for the small screen!

The thriller is in the works for Peacock from Tish Cyrus’ HopeTown Entertainment, writer Melissa Scrivner Love and Universal Television. 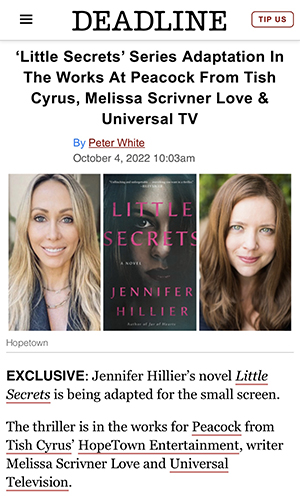 “A diabolically plotted psychological thriller of lust, obsession, greed, and betrayal… Hillier remains an author to watch.”
—Publishers Weekly
“A delightfully twisty psychological thriller perfect for fans of You and Gone Girl.”
—Kirkus Reviews
“This book belongs at the top of your must-read list.”
—Suspense Magazine

“Unflinching and unforgettable. Little Secrets has everything you want in a thriller.”
—Riley Sager, New York Times bestselling author of Lock Every Door

“You will be obsessed with this unputdownable read.”
—Liv Constantine, international bestselling author of The Last Mrs. Parrish