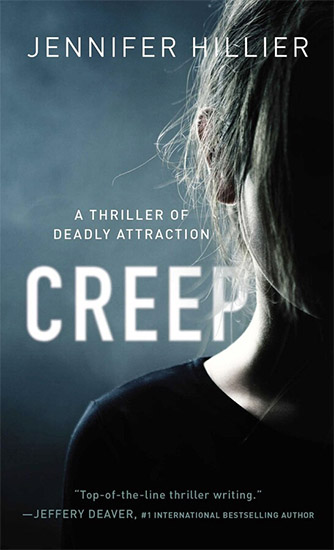 Pulsing with the dark obsession of Radiohead’s song “Creep,” Jennifer Hillier’s superb debut thriller is a terrifying cat-and-mouse game between a woman with everything to lose, and the lover she couldn’t resist…who’s now the monster who won’t let her go.

A popular psychology professor in Seattle, Sheila works hard to keep her secrets hidden. On the surface, she’s an expert in human behavior and a well-liked educator, but nobody knows she’s a recovering sex addict in therapy—not even the love of her life, Morris. And she needs it to stay that way, or she could lose everything.

But Ethan Wolfe is impossible to resist. The graduate student is brilliant, charming, and seductive as hell. He’s also Sheila’s teaching assistant, and thirteen years her junior. Ignoring the risks to her career and relationship, they begin an illicit affair that lasts three months, until Morris asks her to marry him. Determined to get her life back on track, Sheila commits to a future with her fiancé, a man she’s not sure she deserves.

But Ethan can’t move on so easily. He didn’t pursue his professor for as long as he did to get dumped for some boring, middle-aged suit. Ethan’s made plans too, and he doesn’t take rejection well. When the body of one of Sheila’s students is discovered floating in Puget Sound—a young woman Ethan was rumored to have dated—it’s clear that the graduate student has secrets of his own.

And he’s not about to let Sheila get away.