(Note: This is a repost of a newsletter originally sent to subscribers on July 16, 2019)

You guys know I can’t come back from New York and not immediately tell you all about ThrillerFest. I have SO MUCH JUICY GOSSIP. But dammit, I can’t write about that stuff, so I’ll tell you about the good stuff that isn’t gossip.

Oh, you guys. It’s hard to explain the emotions of this past weekend. For starters, I was a nervous wreck getting ready for NYC, which was so annoying because this was my eighth ThrillerFest. I know what to expect, and it’s always a great time, and nothing terrible ever happens. But this time, there was something new. It was my first time attending the conference – or any con, for that matter – as a nominated author.

I arrived Thursday afternoon. Over the next couple of days, I made it through two panels and some lunches and dinners, and by the time the banquet started on Saturday, I was barely holding it together. Keep in mind, I did not think I was going to win. At all. The lineup for my category, Best Hardcover Novel, which is always the last award of the night, was stellar. I was up against Lou Berney‘s NOVEMBER ROAD, Julia Heaberlin‘s PAPER GHOSTS, Karin Slaughter‘s PIECES OF HER, and Paul Tremblay‘s THE CABIN AT THE END OF THE WORLD. Everyone I ran into nodded when I expressed my nervousness. “Oh yeah,” they said, with a sympathetic head tilt. “That’s a tough shortlist.”

Many people, including my husband, told me afterward that the banquet and the awards ceremony were fun. “It went by quick,” one person said. “I thought it was pretty snappy this year,” another person said. I’m sure they’re right, but THAT’S NOT HOW IT FELT AT THE TIME. It felt like the entire night – especially once the awards started – went in slow motion. And not just slow motion, but the slowest motion in the history of the concepts of slow and motion. I couldn’t process a word anyone was saying on stage. They were speaking too slow. And when they were speaking, they spoke for years. YEARS.

And then finally, a century later, it was the last award. And then someone hit the fast forward-to-warp speed button and I heard my name. And everything went silent. Somehow my hands were covering my face and I found myself peeking through my fingers because I wasn’t sure I heard it right. I felt hands clapping my back – my editor’s, my husband’s. I heard whooping from multiple directions. People were smiling at me. At ME. I remember dropping my hands and looking at my editor, Keith, and saying, “Really?” And he said, “Really.”

The walk to the stage took another decade. And our table was practically right in front. I was wearing high heels and I remember praying I wouldn’t trip. I must have been walking too slow, because halfway through, everyone clapped again. And then I was up on stage, the lights bright in my face, and I opened my mouth to start speaking… and nothing came out but a croak.

More laughter. But it was kind. It was supportive.

Somehow Darren, my husband, had shoved a brief list of names into my hand that I had scribbled on a piece of hotel paper just before the banquet started. It was like magic that I was actually holding it. I unfolded it and began to speak. My voice was choked, and I was on the verge of ugly-crying, but I said what I needed to say the best I could (and if you’d like to watch my speech, Darren uploaded it to Facebook here: https://www.facebook.com/skidarren/videos/10216632174334900/.

There are a hundred people I didn’t get a chance to thank on stage, and watching it back three days later, I wish I could have named every single friend who’s been with me on this journey while I was standing up there. There’s one friend in particular I didn’t mention – I only wrote down the names of those on my publishing team – and I’m horrified I didn’t. I can only blame brain freeze and the fact that I didn’t see him all weekend (he tore his Achilles two weeks ago and couldn’t make the conference). I meant to thank him, because this business is tough, and he’s one of the people I lean on, and celebrate with, and completely adore (when he’s not irritating me).

And that’s Ed Aymar. Our friendship is so much more than what I just wrote above, but he knows. All the love, Ed. You were so missed this weekend (you mofo).

If you follow me on Facebook, Twitter, or Instagram, you’ve already seen these pics and can close this newsletter now. But for those of you who don’t do social media, here are a few of my favorite snapshots from what has been, professionally, the greatest highlight of my career so far, by a mile. Huge congratulations to all the award nominees and winners, especially my friend Alan Orloff, whose book, PRAY FOR THE INNOCENT, won for Best E-Book Original.

Finding my book in the book room in the “Award Nominees” section – a first! 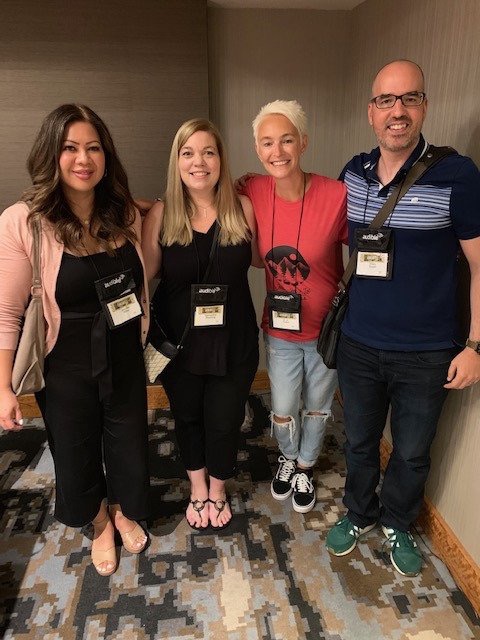 With Darren at the pre-banquet cocktail party. He’s so handsome.

With my editor, Keith Kahla, looking very dapper (him, not me – I look stunned).

The first moment I saw my agent, Victoria Skurnick, after the ceremony.

With my agent, Victoria, and my editor, Keith.

With two of my author buddies, Mark Edwards and Matthew Farrell. 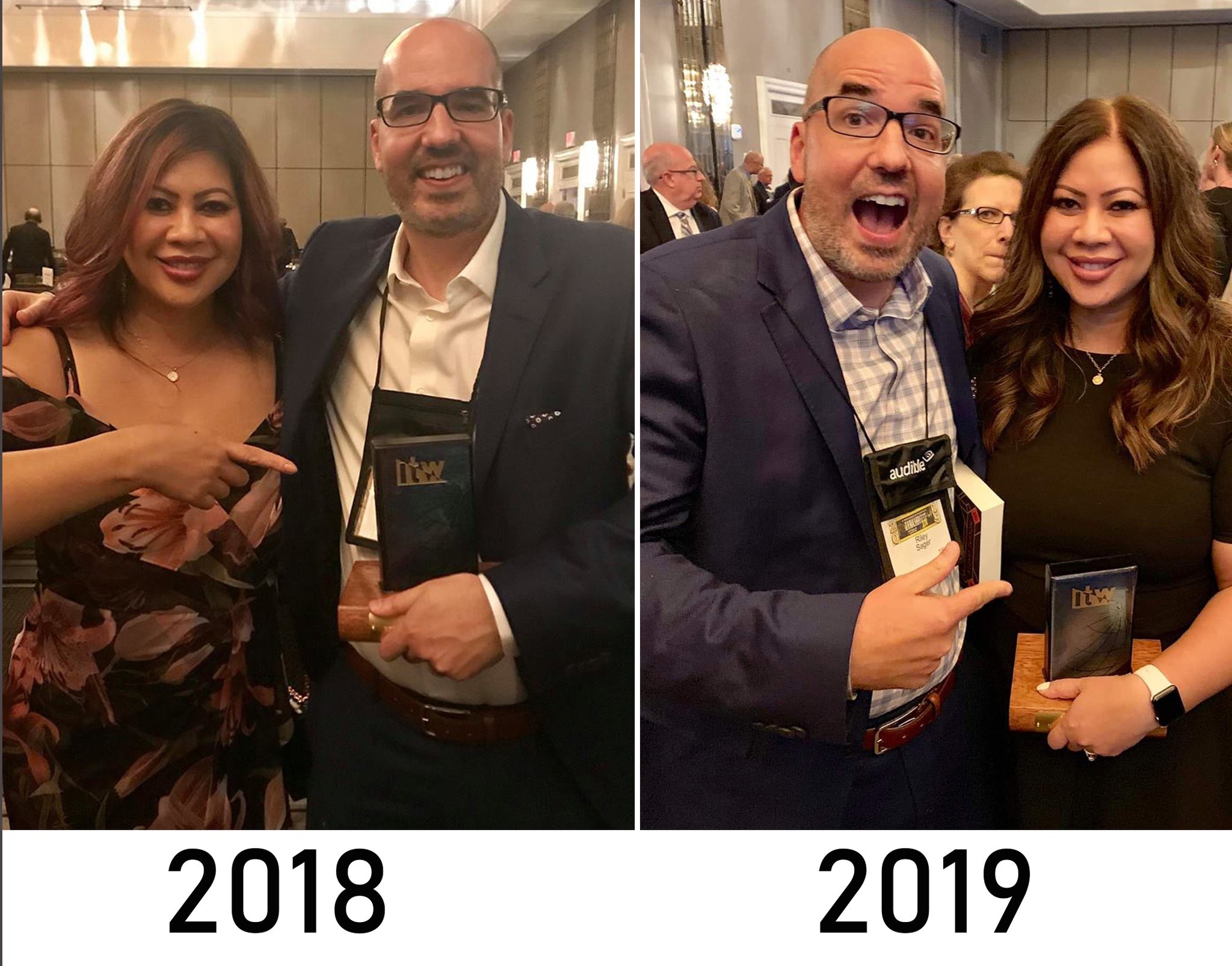 My friend, Riley Sager, had the brilliant idea of recreating last year’s picture when he won for Best Hardcover Novel. This is so perfect.

That’s my name! Engraved and everything! It must be real… though I still check it, just to make sure.

JAR OF HEARTS will be out in paperback on August 6th. 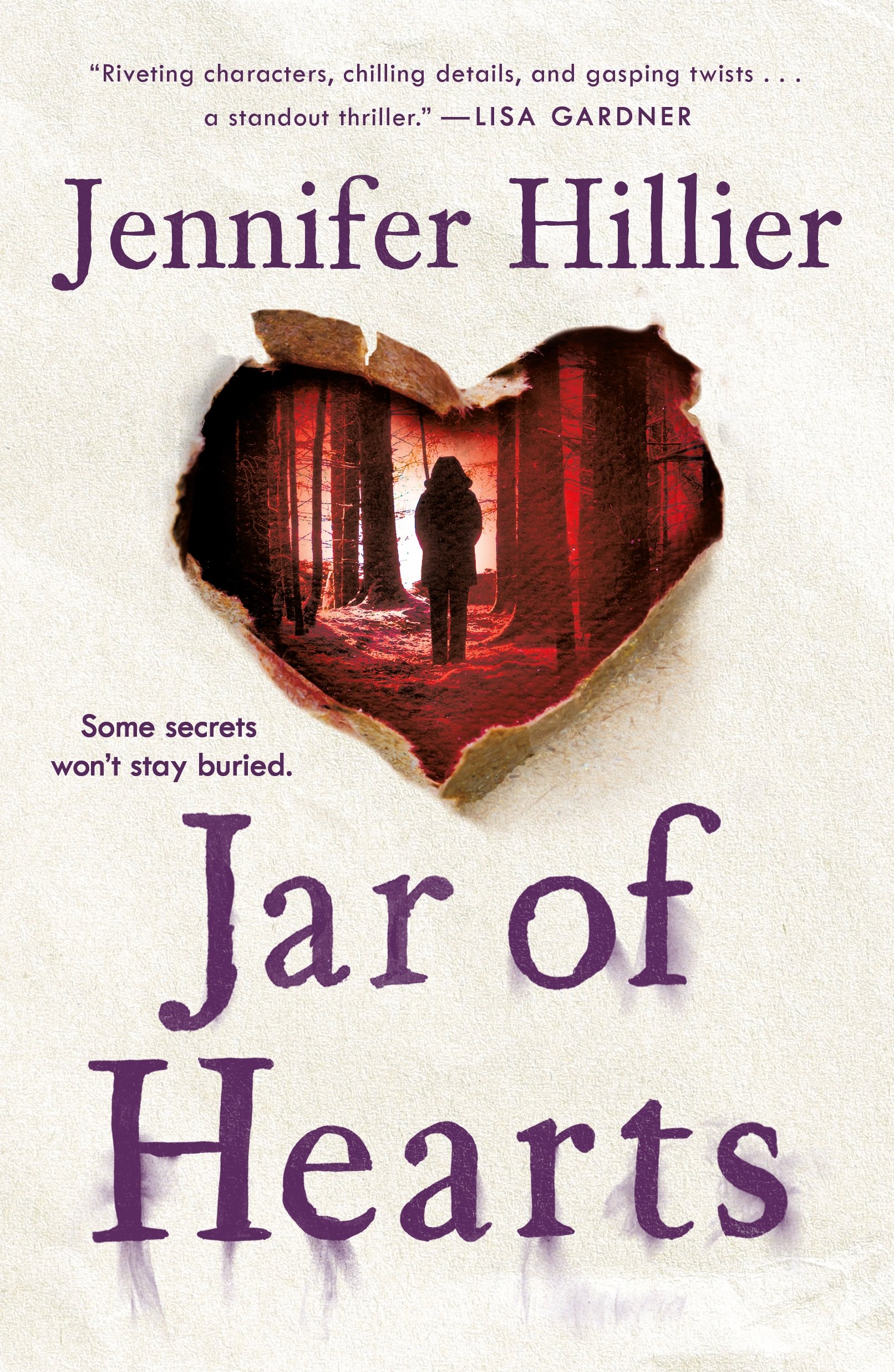