Remember when I said I wasn’t going to bore you with a Bouchercon write-up? I lied.

Sometimes it takes a few days to process what your overall takeaway is from an experience like Bouchercon, which is huge and loud and fun and so, so busy. I used to panic at the thought of not being able to talk to everyone, but I’ve finally come to accept that I won’t. It’s just not possible. Last weekend, 1,700 people attended Bouchercon Toronto at the Sheraton Hotel. Sometimes all you can do is wave frantically at someone as they pass you on the escalator going the opposite direction, and shout your hellos as best you can over the noise (this was me with Eric Beetner, by the way).

My highlights from Bouchercon 2017:

I got to spend time with my editor, Keith, and rest of the folks at St. Martin’s Press and Minotaur Books who were in Toronto. This was an absolute delight for me. Not just because Keith took me to a cat cafe on the first day (which he did! We are MEANT 2 B, remember?), but also because it’s absolutely the coolest thing to talk face-to-face with the people who are publishing your book. As an author who doesn’t live in New York (and most of us don’t), we don’t get face time with our publishing peeps very often. I got to mingle at my first Minotaur Books cocktail party. I got to have dinner at a very hip restaurant (do people say hip anymore?) in Toronto called The Carbon Bar with the SMP gang, and get to know authors Julia Dahl and Kelley Armstrong. 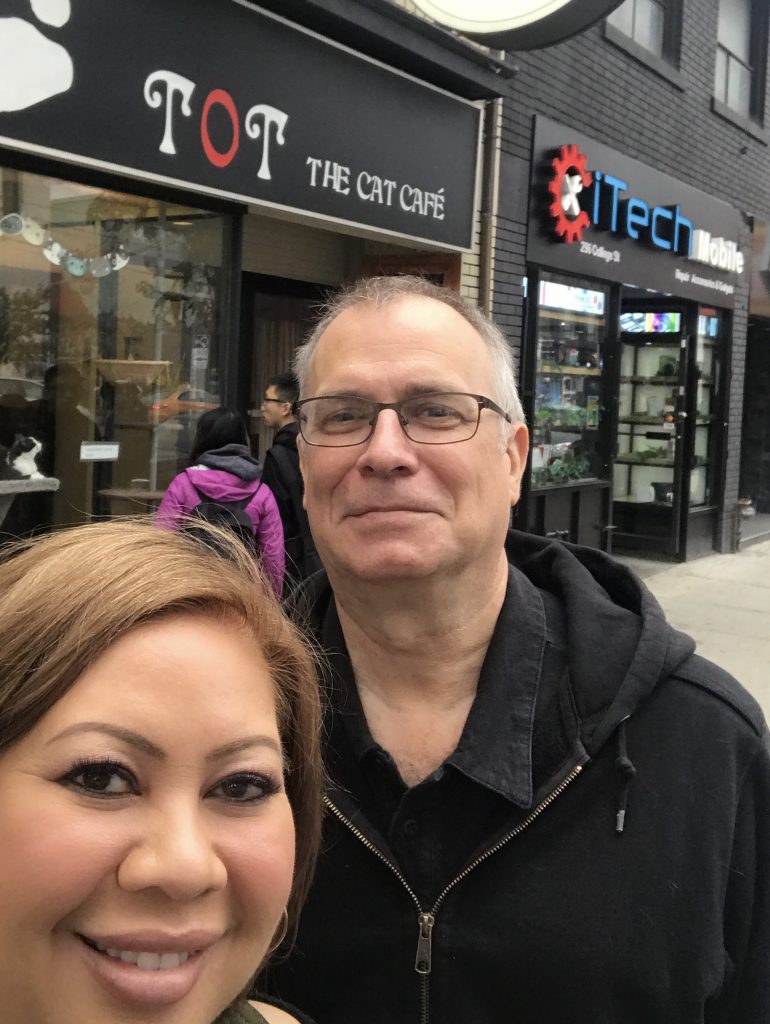 About to go into the cat cafe with Keith! 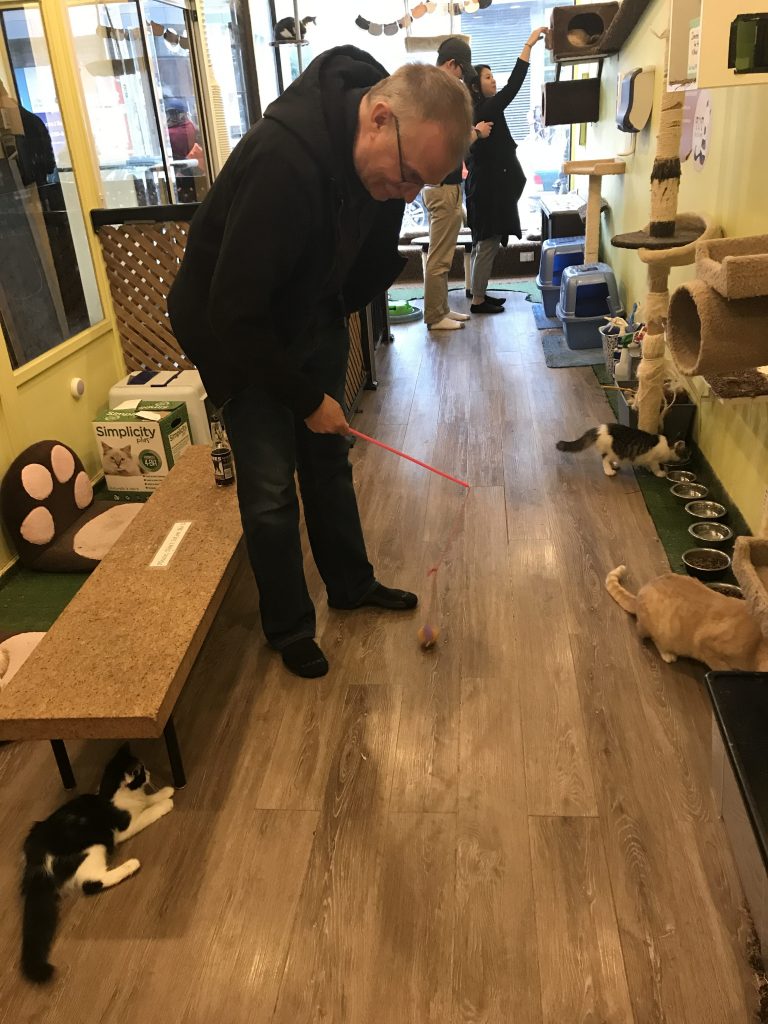 Don’t tell anyone I told you, but Keith has a “cat voice.” Okay, fine. So do I. Can’t help it, they’re just so cuuuuuute. With Andrew Martin, publisher of Minotaur Books. He hosted a lovely cocktail party. And dinner afterwards was delicious. 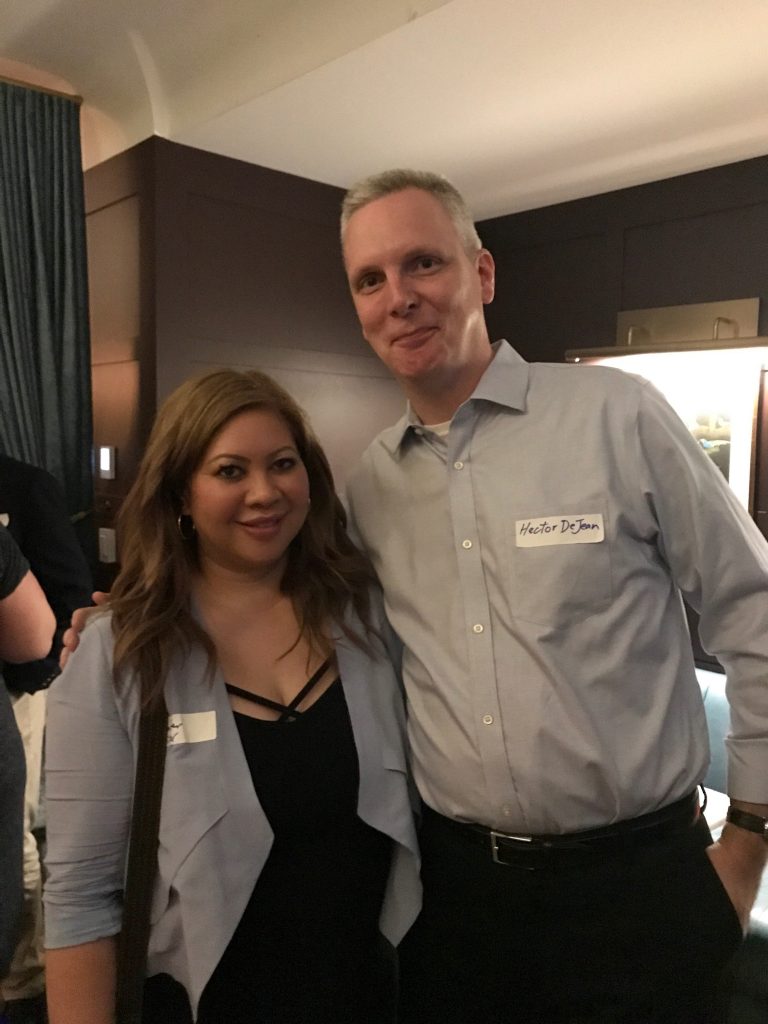 Standing with the tallest man in the world (okay, the room), Hector DeJean, associate director of publicity for Minotaur Books. 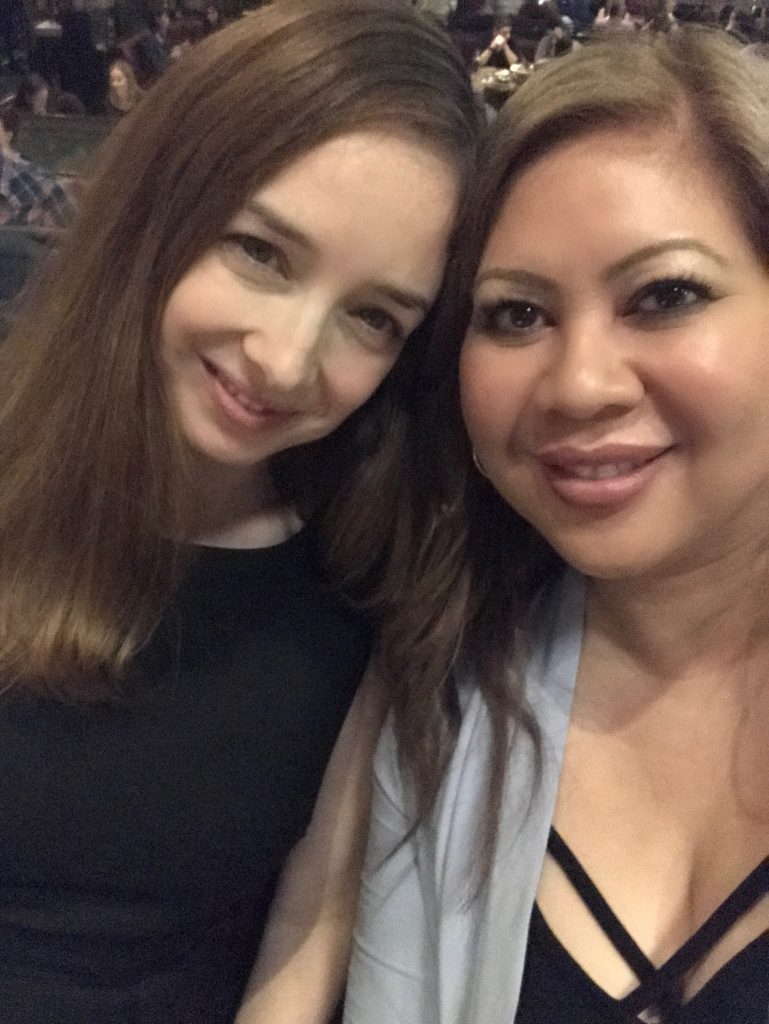 With Sarah Melnyk, my publicist and senior publicity manager at Minotaur. How come we’re the same age and she looks 25? I’ll have what she’s having . . . 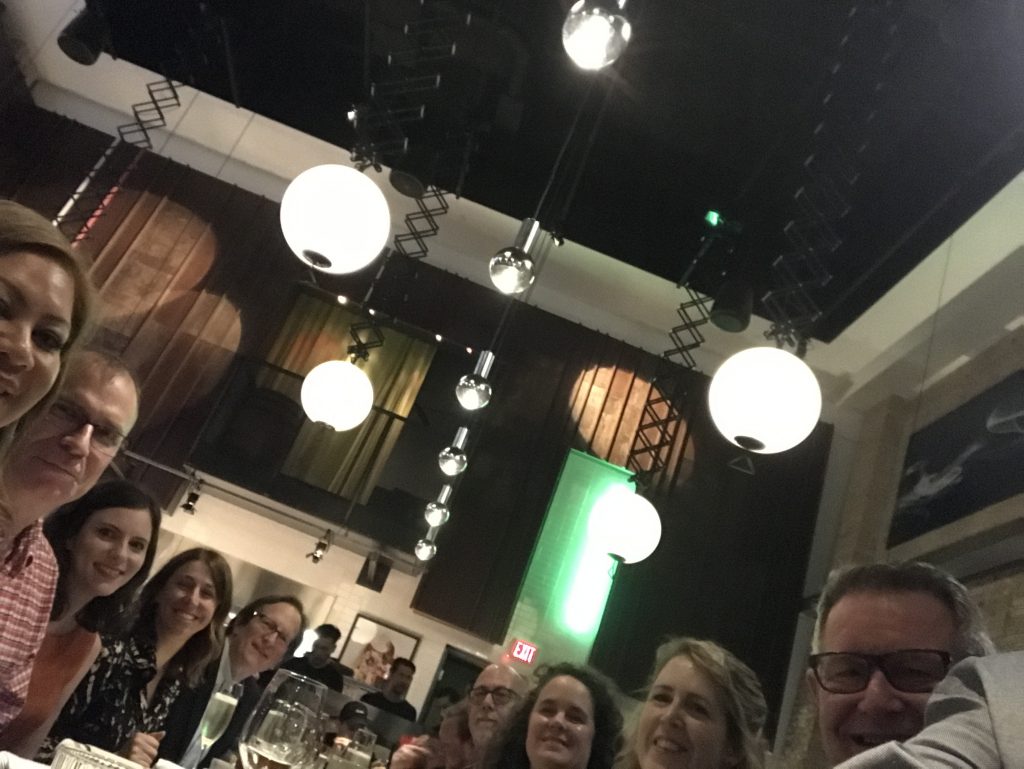 Dinner at The Carbon Bar with the Minotaur Books team!

I got to spend time with my agent, Victoria, who was attending her very first Bouchercon. Her smiling face in the audience at my panel calmed my nerves because I’m always super nervous at any event that actually requires me to speak in front of more than five people. I got to meet my “agency sister,” Susan Elia MacNeal, in person finally, and she’s as sweet and kind as Victoria said she was. 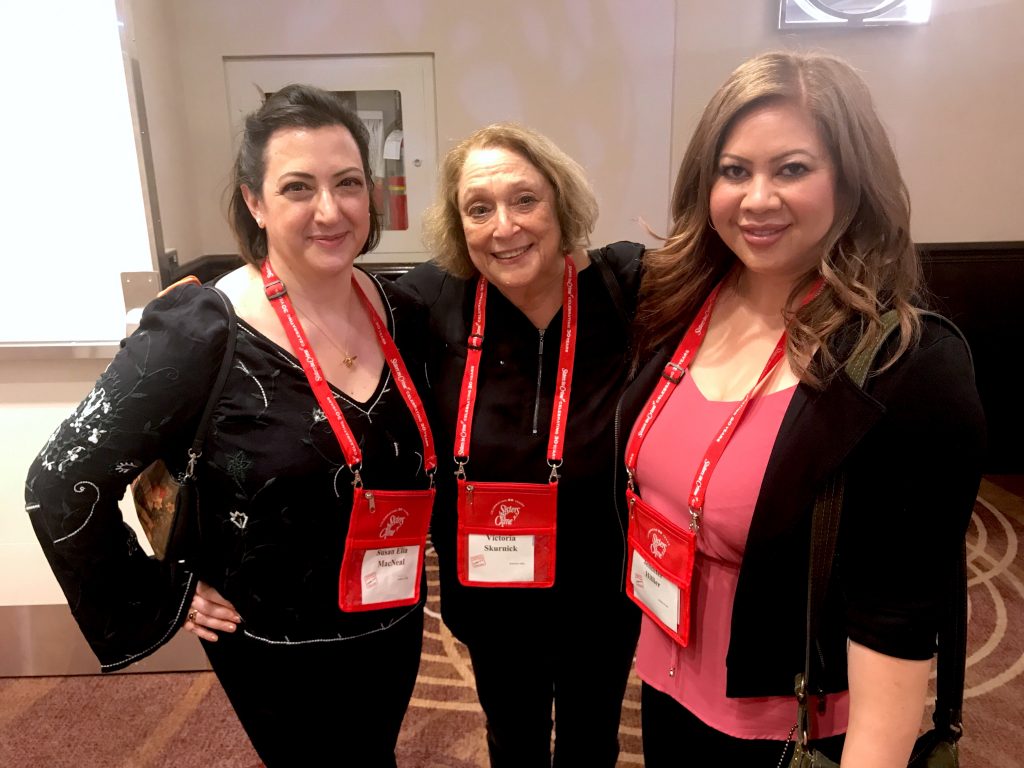 I got to hang out with the gang from The Thrill Begins, the beautiful motley crew of authors put together by my good friend Ed Aymar. We had dinner, and there was cake, and we had lunch, and there were laughs. One of the best parts of dinner was catching up with Mark Pryor, one of TTB’s newest additions, and remind him about the time he blew me off for a drink the very first time we met in person (Bouchercon Cleveland, 2012). I also got to meet JJ Hensley, Tom Sweterlitsch, and Shannon Kirk in person for the first time, even though we’ve been interacting regularly on Facebook as part of TTB for the past couple of years. And it’s always fun catching up with Elizabeth Heiter, Rob Brunet, Gwen Florio, and Wendy Tyson. (And you, too, Michelle Richter!) 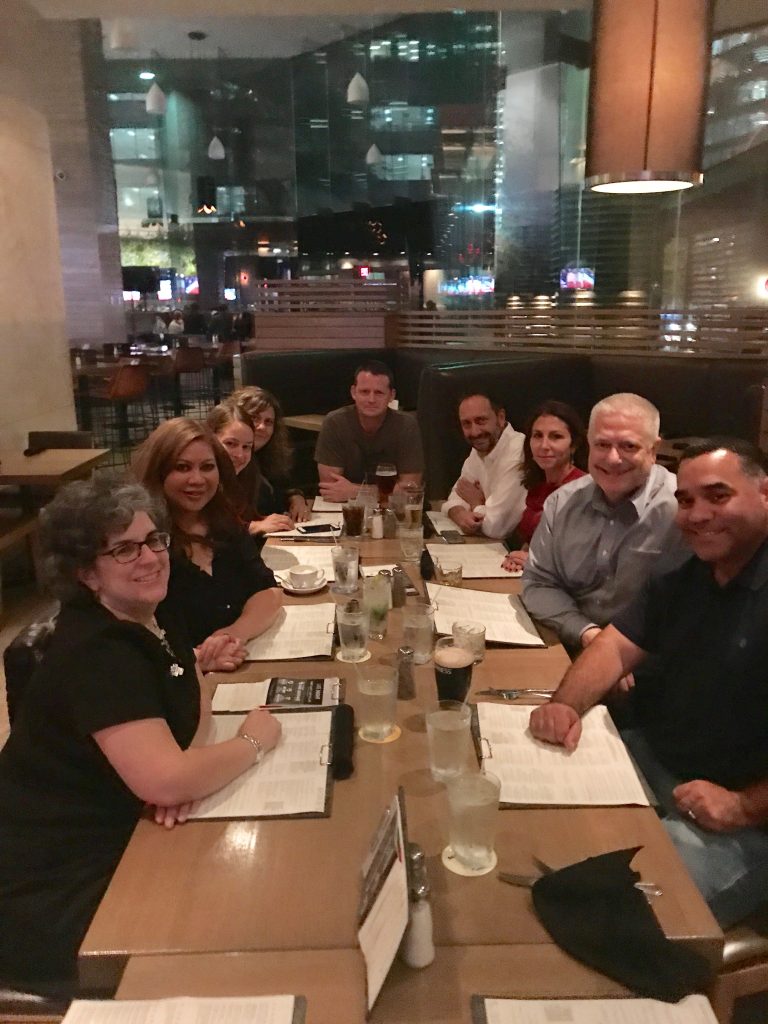 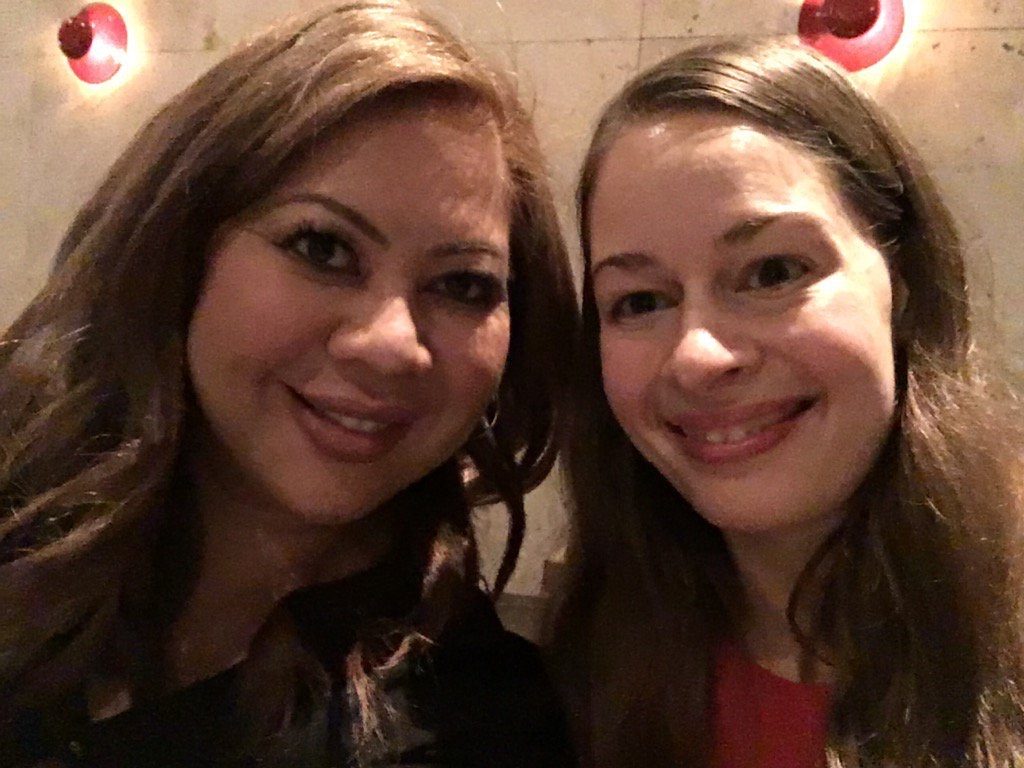 Me with Elizabeth Heiter! I look forward to seeing her every year. 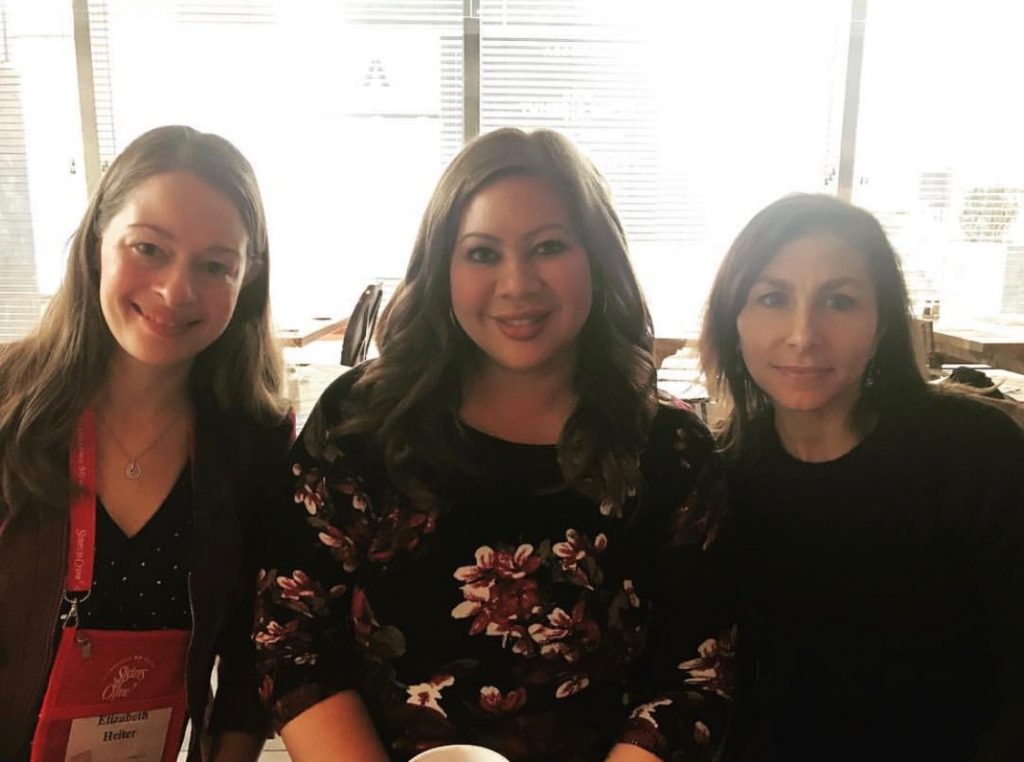 Sandwiched between two of my favorite ladies! Elizabeth Heiter, me, and Shannon Kirk.

I got to have dinner with Gracie Doyle, the editorial director of Thomas & Mercer, who just happens to be a former colleague of my husband, Darren. They worked together for years at Chateau Ste. Michelle, the winery in Woodinville, WA, before she got back into publishing. To see her here in Toronto was both awesome and surreal. It was great to spend time with someone who knows both the wine business and the publishing business really well – a rarity, I’m sure. 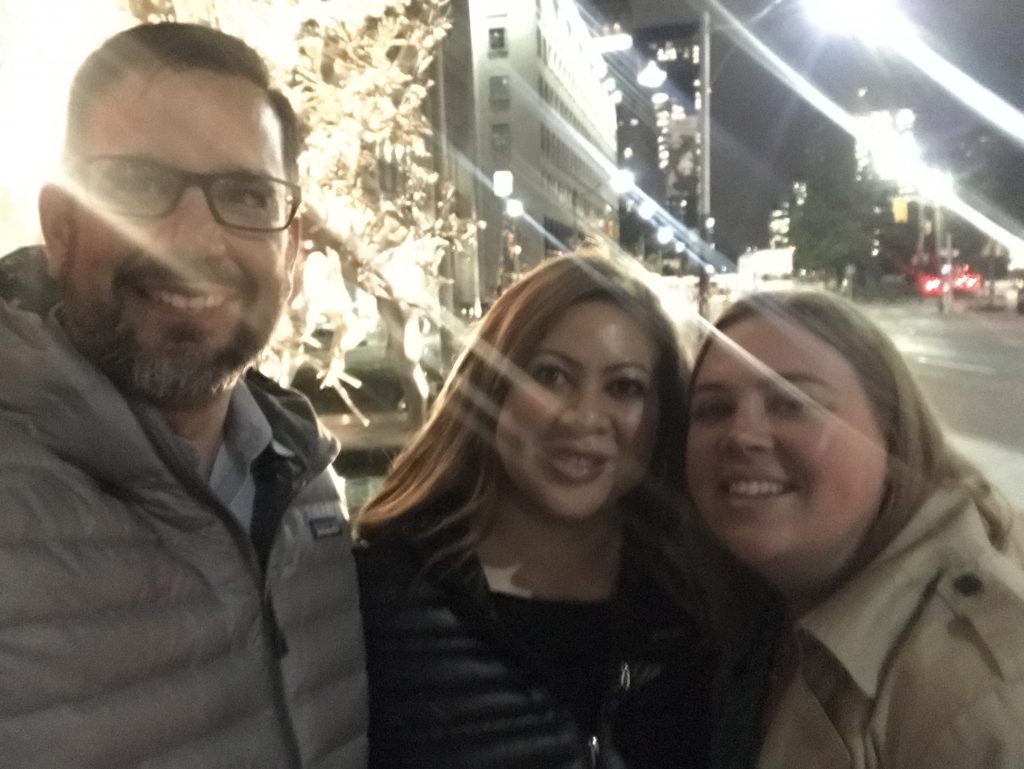 Darren, me, and Gracie Doyle from Thomas & Mercer

I got to have lunch with Mark Edwards. This might seem like a small thing, but it’s not, because as someone who’s equal parts introvert and extrovert, I crave one-on-one time with my friends at these events. It’s important to have someone you can talk with honestly about the challenges of writing and publishing (which are two different things), who won’t judge you, and who’ll remind you that you’re not crazy. 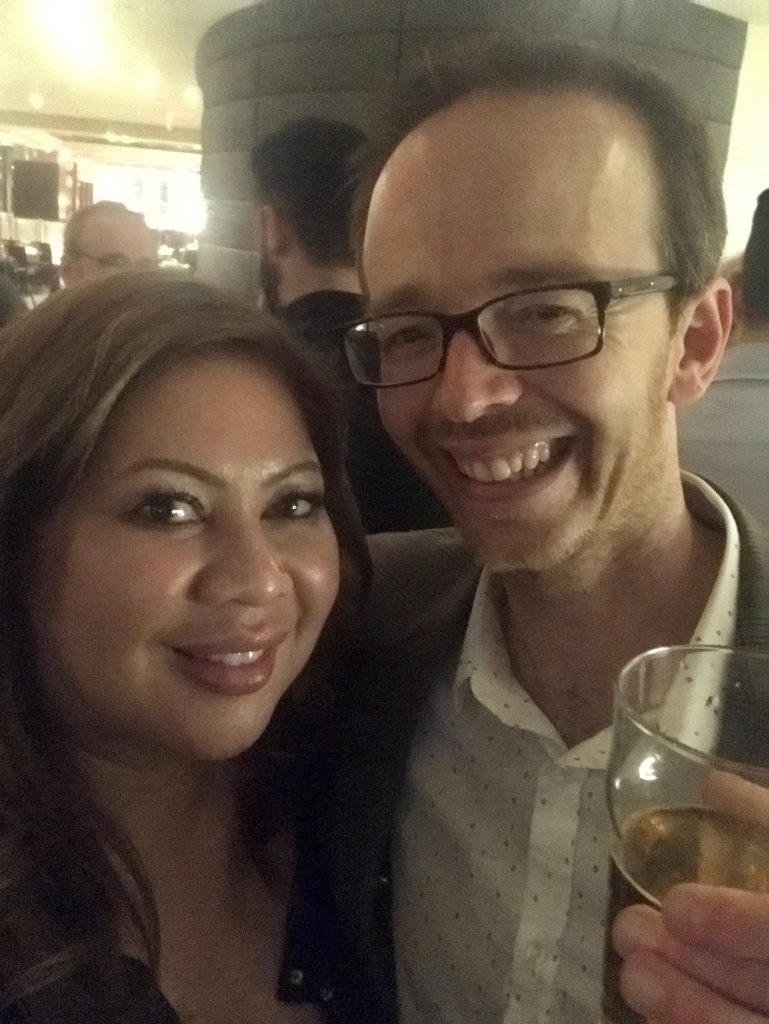 Mark and I have a picture like this from every Bouchercon we’ve attended! Tradition, yo!

I got to be on the Canadian panel with authors Kevin Burton Smith, Hilary Davidson, Paul E. Hardisty, Ausma Zehanat Khan, and David Morrell. Yes, David Morrell! The man who wrote Rambo! 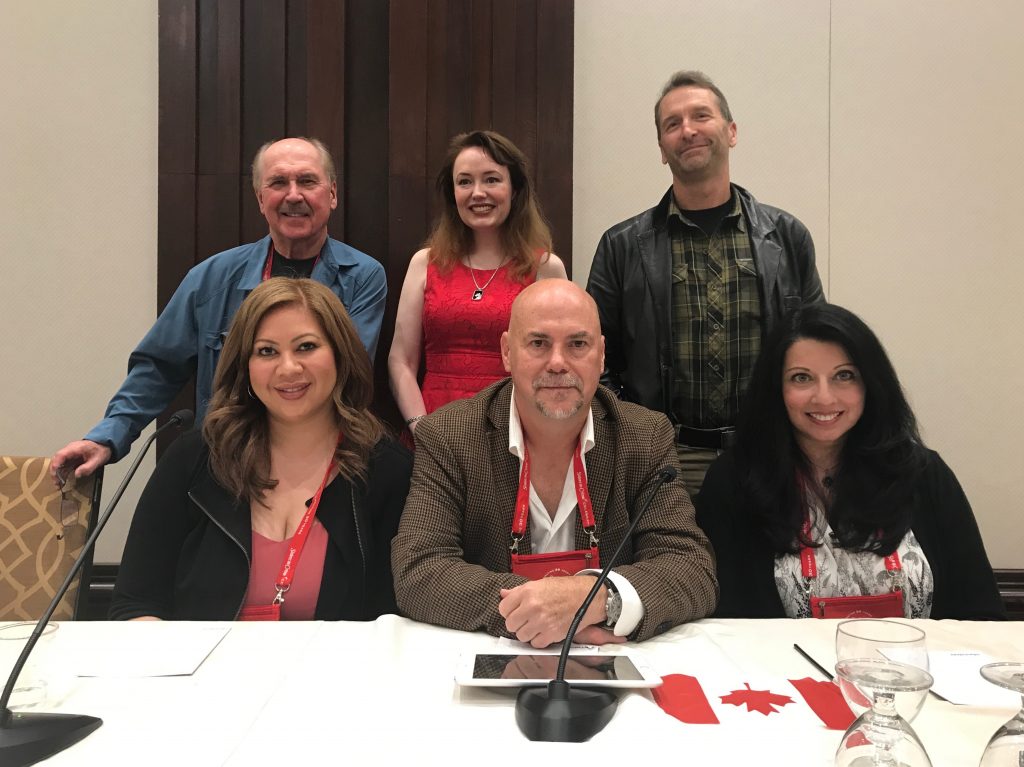 I saw so many friends. I think I hugged most of them, and who I couldn’t hug, I waved to, and who I couldn’t wave to, I thought of kindly in the seconds before they were whisked away. I would name them all, but I’m terrified I’ll forget to mention someone, which might make them feel like they’re not important, and that is SO not the case. I love my writing tribe. I’m so grateful we all have each other, because this writing life is a crazy one. My only regret is I didn’t get to shoot the shit with everyone as much as I would have liked – the days went by too fast.

My overall takeaway? I’m so glad I’m not new. The Bouchercon tribe is an extremely welcoming group, but it really is terrifying the first time you go. I met many first-timers at the convention (and made new friends!) who seemed overwhelmed and uncertain about their place in all of it. I remember how that felt. One of them asked me, “How do you do this? How do you do Bouchercon?” There’s no perfect answer, but I can offer some tips for anyone who who’s thinking of attending in the future:

1. Wear your badge. I know it’s itchy, but the convention badge identifies you as an attendee, which opens the door for people to say hello. Also, Bouchercon is loud, and sometimes it’s easier to read someone’s name than to hear it.

2. Be social. I know this is an obvious one, but if you’re shy and decide to stay in your room all evening, you are SO missing out on the best parts of Bouchercon. The panels are cool, but the bar is better. The Bouchercon bar (and there always is one – usually it’s the bar of the main convention hotel) can be scary at first, especially if you walk in not knowing anyone. But it’s worth it to hang out there, because it’s where all the good stories are told. It’s where all the good information is traded. You don’t have to drink. Just show up. Make yourself approachable. Say hello to the people you know, even if you only know them vaguely. Introduce yourself to anyone you recognize, even if you only know them from Facebook. Nobody will be a dick to you, I promise. (Okay, except for one person, who actually was pretty rude, but I’m not naming names because I know I’ll see them again.)

3. Bring your business cards. This time, I actually remembered to bring business cards, BUT THEN I LEFT MOST OF THEM IN THE HOTEL ROOM. Don’t be me. Bring your cards, have them ready should anyone ask (and they will). Also, ask for theirs. You never know when you might want to find them on Facebook or send them an email later, and it’s hard to remember everybody’s name and how it’s spelled.

4. Take breaks. If you go to a panel at every single time slot, you will be dead by the end of the first day. You have to pace yourself. Remember my mantra: the panels are cool, but the bar is better. Go to a few panels. Do your best. But don’t overdo it. Most of us go back to our rooms and lie down for a bit during the day, or just before dinner. You kinda have to. It’s too much otherwise.

5. Find one-on-one time for a friend or two. It’s hard, because everyone has panels and lunches and dinners and busy schedules, but try, because this may be the only time you’re in the same place until the next Bouchercon. That one-on-one time, even if it’s just coffee for twenty minutes, will recharge you both. And small talk can be exhausting, so not having to make small talk with a friend is so, so nice.

6. Remember that you belong. Bouchercon is for everyone – readers, authors, publishing professionals. Whatever category you’re in, and whatever stage you’re at within that category,  you belong at Bouchercon just as much as anyone else.

What NOT to do?

It’s actually really simple. Don’t be an ass. Don’t interrupt someone’s conversation, neglect to introduce yourself, and immediately start into a confusing pitch with the opening line, “Hi Jennifer, I wanted a bigger name for this, but since none of them seem interested, I thought of you.”

Yeah, don’t do that.