An afternoon at the Washington Corrections Center for Women: Part 1

Let me start by saying that the facility doesn’t look scary. At all. It’s several buildings grouped close together, some newer, some older, and at first glance, it reminded me of a high school or community college. Seriously, if not for the high fence topped with the curly barbed wire, I might not have even realized I was heading to prison. 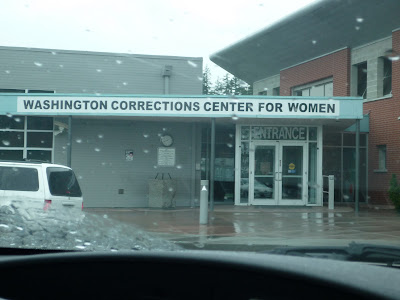 I entered through the main entrance and was greeted by a cheerful, uniformed man at the reception desk. Since I was there between visiting hours, the place seemed fairly quiet (more about that later). I gave the officer my name, signed a clipboard sheet, stuck my purse in a locker (I got to keep my notebook and pen), and got searched with the electronic wand thing (the name of this device eludes me). I was issued an ID badge that said VISITOR which I clipped to my jacket. The superintendent then came out to greet me, even though I was a good ten minutes early, and we headed a few steps down the hallway to her office.

The thing that struck me right away about the superintendent was her big, welcoming smile and her passion for her job. Her office was spacious and bright, with a separate table for meetings just like this one. I had a list of questions prepared, but realized quickly I wouldn’t need to refer to them, because she was very comfortable talking about the prison. Our conversation was natural and easy.

Here’s what I can remember from the interview (and I’m making every effort to use layman’s terms, because it seems the Department of Corrections has an acronym for everything):

* There are about 850 offenders currently incarcerated at WCCFW. There are eight living units in the prison:

* 30% of offenders in Washington state will re-offend.

* 90% of WCCFW’s offenders will ultimately be released. Only 10% have life sentences without parole, or sentences extending beyond their life expectancy.

* 75% of offender conflicts (arguments and fights between the inmates) are due to drama stemming from romantic relationships between them. While most of the offenders are heterosexual, it’s quite common for the women to go “Gay for the Stay”, even though they have husbands and children on the outside. The official policy of the prison is that sexual contact between offenders is an infraction, but it happens quite frequently.

During the interview, several employees came into the superintendent’s office to fill her in on a crisis situation that was currently happening. The reason the place was so unusually quiet was because it was on lockdown! An offender in MSU (Medium Security) was freaking out and acting violent. She had dragged her mattress into the showers (in MSU the cells are “dry” – showers and toilets are not inside the cells), and then for no apparent reason, she started kicking another inmate and screaming.

The Crisis Negotiation Team (CNT) was sent in to try and verbally calm her down. They weren’t successful. There was then discussion about sending in a Quick Response Team (QRT – they wear masks, shields, and body gear), but ultimately the decision was made to use a pepper spray-like device referred to as “CO” on her instead.

I timidly asked one employee what “CO” stood for. He couldn’t remember the exact chemical name, but I was told that the spray hurts. It’s purposefully designed to inflict pain, and is very effective in getting situations like this under control.

Guys, you really can’t make this shit up.

I never did find out whether it was that particular offender who was causing the ruckus in MSU, but later in my visit, I got an update on the outcome. They went in with the CO spray, and when the offender saw it, she suddenly became very cooperative. She wasn’t sprayed. Crisis averted. She was sent directly to TEC (the mental health facility) for evaluation.

According to the superintendent, this is all part of your average Friday.

Stay tuned for tomorrow’s post, where I’ll tell you all about the tour I took. With the exception of the actual cells in Close Custody and Medium Custody, I got to see everything, including many of the offenders, right up close. I even talked to one.

But I’ll say this for now: My first impression of the offenders is that I’ve never seen so many young women with face and neck tattoos. For some reason I found this really disturbing.