One week to go

(Note: this is a repost of a newsletter originally sent out Tuesday, June 5, 2018)

Her: “You seem a little, uh, tightly wound.”

I’m fine, really, except for the fact that I’m only half-listening when people are talking to me; I shout answers to questions nobody asked; I drove past my son’s daycare twice when I went to pick him up and got confused as to why they moved the sign (they didn’t); and everything I eat hurts my stomach. In other words, we’re a week out from JAR OF HEARTS being released, and I’m basically a wreck.

I had a conversation with a good writer friend the other day, and it went something like this:

Him: “How you are feeling about everything?”

Him: “Totally normal. Do you have any wine in the house? Also, try binge-watching The Americans. That’s how I got through my last release.”

I’m feeling a specific kind of anxiety that only comes with releasing a book. I admit I’ve been leaning a little harder on my writer pals these past few weeks, who’ve been through this many times and seem to know exactly what to say to soothe a frazzled (but normally chill) author who hasn’t released a print book in almost four years.

Not that my non-writer friends aren’t helpful, because they are. They’re my cheerleaders, the ones who believed long before I did that I would write Something Great and Be Somebody, even though they hadn’t yet read anything I’d written. To enter into the home stretch of a book release and come out the other side intact, you need friends from both categories. Holy crap, am I ever thankful for all of them.

Especially my agent, Victoria, who told me, “It’s going to be okay. And even if it’s not okay, it’s still okay.”

I repeat those words to myself every day.

The reviews for JAR OF HEARTS haven’t just been good, they’ve been outstanding. It’s hard to write this and not feel like I’m bragging—and I apologize if that’s how it comes across—but I also don’t want to diminish the feedback the book’s been receiving, which across the board has been fabulous. “An embarrassment of riches,” as my editor put it, and he’s exactly right. The book seems to be resonating with readers way more than I’d dared hope, and the reviews have been glowing.

Every month, librarians across the U.S. choose 10 books they love the most, and not only was JAR OF HEARTS one of the selections for June, it came in strong at #5! From LibraryReads (http://libraryreads.org) : “A suspenseful thriller told from multiple perspectives. A Seattle detective must unravel a web of secrets dating back to his high school days.”

The Cleveland Plain Dealer chose it as one of their Scorching Summer Beach Reads, saying, “It’s not often that a mystery features such a fresh plot. Jennifer Hiller’s thrilling and quite terrifying Jar of Hearts is definitely not something you’ve read before… will surprise even the most hardened thriller readers.”

The Minneapolis Star Tribune  selected it as one of their Recommended Summer Books, saying, “The main character in this mesmerizing and unsettling thriller still haunts me… Plan to read this in one sitting.”

CrimeReads chose it as one of their 10 Most Anticipated Reads for June, saying, “Hillier has been writing excellent creepy serial killer thrillers for a few years, including Creep and The Butcher. She’s upped her game considerably with Jar of Hearts… pretty much everything you want in a thriller: fast-paced with sympathetic characters and a whole lot of murder.”

New York Times bestselling author (and fellow Canadian) Chevy Stevens made an ENTIRE VIDEO about the book, calling it “riveting” and “hard-hitting.” Guys, this is an author I respect and admire beyond words… consider my mind blown. Watch Chevy’s video here and leave a comment on her page—you could win one of five copies of JAR OF HEARTS that she’s giving away.

You guys know I’m terrified of Goodreads  and try to never, ever go there unless I’m forced to, but I haven’t told you why. So here’s the story, once and for all.

In July 2011, my debut novel CREEP had just come out. I didn’t have nearly as many writer friends back then to offer their wisdom and assistance in navigating the stormy waters of releasing a book, and the months leading up to July were more nerve-wracking and isolating than I was expecting.

I was in New York for ThrillerFest the very next day after the book officially came out, and while it wasn’t my first time at the conference, it was my first time attending as a published author. It was the first time I met my agent. It was the first time I met my editor. It was my first tour of the Simon & Schuster offices. To celebrate CREEP’s release, the publisher threw me a fancy lunch at a fancy restaurant, where I sat surrounded by smiling faces who said nice things about my book. At the conference, I said hello to Jeffery Deaver and thanked him for his generous blurb. I was on the Debut Authors Breakfast panel, where I nervously recited my prepared one-minute speech in front of a ballroom full of attendees. Karin Slaughter gave a warm and funny keynote address, welcoming all the debut authors into the fold. I signed lots of books. The whole experience was a whirlwind and a dream come true.

As I was getting into bed on the last night, I decided to see if I had any new reviews on Goodreads. You see, Goodreads and I were friends back then. I used the site regularly to track my favorite books and read reviews for others I was thinking of adding to my to-be-read pile. The last time I’d logged in was before I’d left for New York, and CREEP only had a couple of glowing reviews (both from friends of mine). I wanted to see if there were any more.

And there, in black and white, was my very first negative review.

It was a two-star, which really should have been a one-star, considering how brutal it was. It criticized the book and all the big things that were so obviously terrible about it. It questioned the integrity of my publishing team for putting out such an awful novel, and snarked at the skill and experience of my editor for not doing a better job. It nitpicked on a bunch of little things. It was, in other words, Really Fucking Mean.

Bad reviews are par for the course in author world, and the longer I write, the less they bother me (I mean this honestly—I wrote about this in my last newsletter. But this was my first bad review, posted for all the world to see, and it stung in ways I couldn’t even articulate. Back then, I was a baby writer. I didn’t have a fraction of the thickened skin I have now.

And whoever posted this review hadn’t posted anything on Goodreads before. There was nothing in their profile other than that one review for CREEP, and they’d only just joined Goodreads that same month—July. Which, considering the review was posted on July 5th, the exact day of the book’s release, made me feel like this person had specifically joined Goodreads just for this.

It felt personal. And I couldn’t help but take it personally, sniffling myself to sleep, all the joy I’d felt over the past week dissipating. When I woke up the next morning and packed up to go home, everything somehow felt different. My bubble had burst. Being an author was hard. Anonymous keyboard warriors could be nasty. These were tough lessons to learn right off the bat, but in hindsight, I’m glad I learned them early, because no review has stung that badly since. The unfortunate part is, I’ve never again felt quite as optimistic and hopeful as I was five minutes before I read that one lousy review.

What’s interesting is the review isn’t even there anymore—both the review and the profile disappeared a few months later. It lasted just long enough to scare me off Goodreads, and dampen what was an otherwise incredible first week as a published author.

I know now that mean-spirited reviews say much more about the reviewer than they ever will about the book. I also know now that reviews are generally not meant for the author. They’re not meant to tell the writer how to write. They’re meant to tell other readers what to read. I can choose to eavesdrop on those conversations anytime I want to, but it’s not always helpful to read negative feedback about a finished book when I’m trying to write a new one. I will happily read reviews that are sent to me by my editor, publicist, or agent, because they’ve seen them first, and that’s comforting. But I banished my google alert the following year, after a bad review for my second book spoiled my anniversary dinner (serves me right for checking my phone at the table).

It’s self-preservation, yo. You have to be careful about what you let filter through, which I think is a good rule for all aspects of life.

I’ve been checking Goodreads a little bit for JAR OF HEARTS. Not every day or even every week, but I peek once in a while. As of this writing, JAR OF HEARTS has 505 reviews and 651 ratings, with an average rating of 4.34 stars. WOW. Just… wow.

So we’re buddies again, me and Goodreads. But I still get heart palpitations every time I log in.

One last winner for JAR OF HEARTS! Congratulations, Christina Donlon, you’ve won an ARC! Please send your mailing address to jenniferhillierbooks@gmail.com and I’ll have it mailed right out to you. 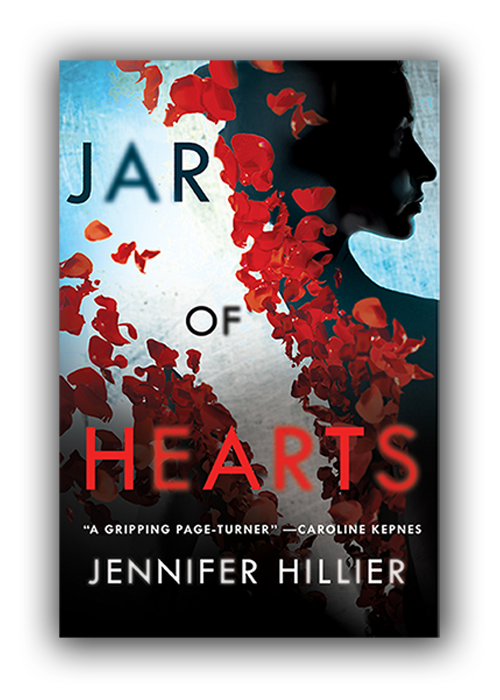 My author copies are heeeeere

One day he’ll be impressed. I hope. Thanks, Minotaur, for the best box o’ books ever! 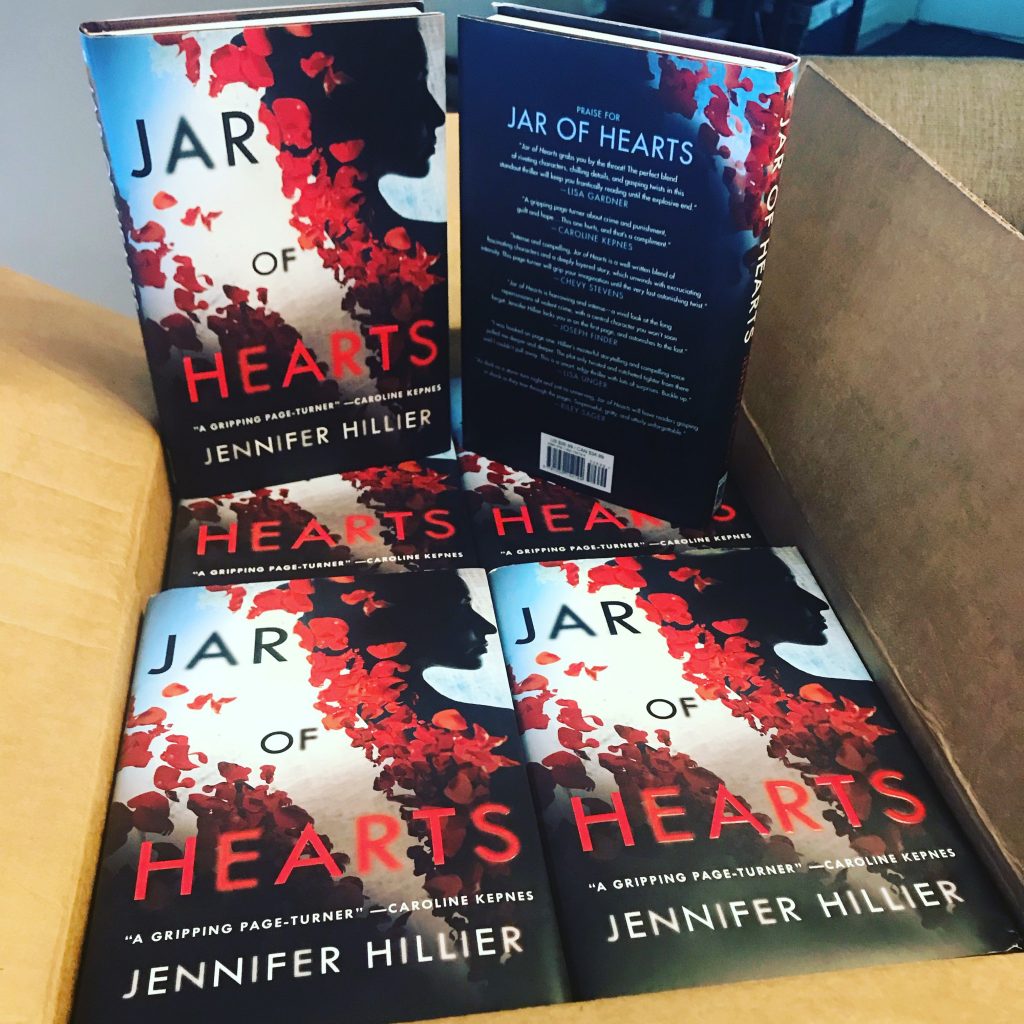 The next newsletter I send out will be the day JAR OF HEARTS releases. So in case I’m overwhelmed and forget to say it…thank you. Thank you for reading, for supporting, for being here, for telling your friends and family about my books, and for the thousands of virtual smiles and hugs you’ve sent my way over the years. You guys rock, and I couldn’t do this without you.